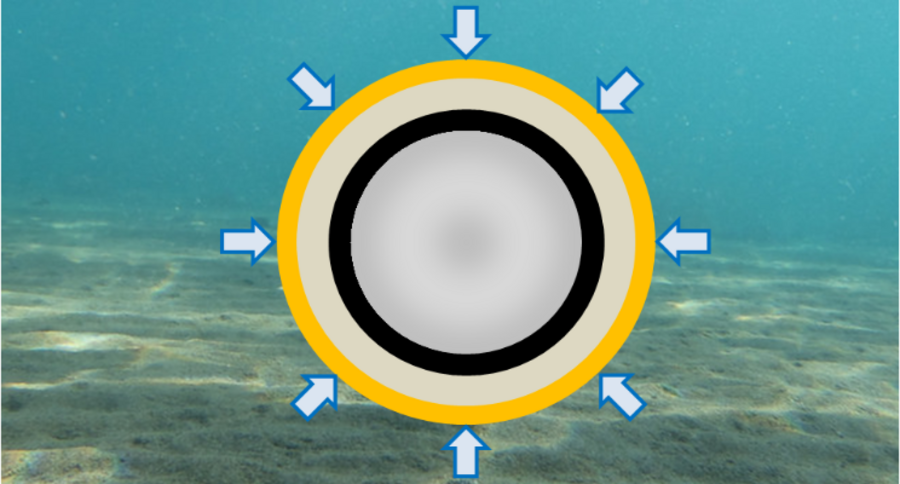 We often receive feedback from our clients that highlight the unique benefits and impact that TCP makes on their operation and subsea infrastructure. However, since TCP is different from steel and flexible pipe, our clients also have questions and try to understand this promising product much better. In this article, we highlight the collapse resistance of our Thermoplastic Composite Pipes along the lines of some frequently asked questions.

Which parameters influence the collapse resistance of TCP?
Let’s start with trying to understand the collapse strength of a TCP. Collapse can be caused by two so called “failure mechanisms”:

1.     Structural buckling. This is the leading mechanism in case of thin-walled pipes, generally pipes that have been designed for a low pressure rating. The buckling strength of the pipe is determined by the roundness of the pipe and the stiffness of the materials used. As such, this collapse mode is very much similar to that of steel, albeit using a different stiffness.
2.     Compressive failure of the composite layer. When the pipe has a thicker wall, for instance as result of dimensioning to sustain a higher internal pressure, then this will be the leading mechanism for collapse. The compressive strength of the composite material is the main design parameter.

For thermoplastic materials, the properties depend on time (creep effects) and temperature. So, both the stiffness (relevant for the buckling scenario) and the compressive strength (compressive failure scenario) are influenced by time and temperature. In addition, exposure to service fluids might cause swelling of the thermoplastic materials. Swelling results in slightly softer material behavior, very similar to a slight increase in temperature. All these effects are measured during the material qualification program according to DNVGL RP-F119 and validated by the full-scale qualification tests.

What is the effect of combined loads?
The effect of other loads acting on the pipe must be taken into account when evaluating the collapse resistance of TCP. Other loads could, for instance, result in additional compressive stresses or ovalization, affecting the roundness of the pipe.

We receive most questions related to collapse under bending. For traditional solutions, bending causes significant ovalization, which has a large impact on the collapse strength. For TCP however, the additional ovality due to bending is very low, far less than our manufacturing tolerance on ovality. Recently we measured one of our products that had been stored for two years at its storage MBR. The total ovality was still within our manufacturing tolerance and in very good alignment with the calculated ovality.

The other effect of bending is that it introduces compressive stresses, which obviously will reduce the collapse strength in the case of compressive failure of the composite layer.

So what is the collapse strength of TCP then, and how deep can TCP go?
Assume, for sake of simplicity, compressive failure as leading mechanism. At moderate temperatures, the compressive strength of a composite is roughly half the tensile strength. With that, we have an easy rule-of-thumb to estimate the collapse strength of a TCP: it is simply half its internal pressure rating. So, for a 6 inch 10,000 psi rated TCP, the water depth rating therefore is over 3000 meters.

Would a carcass then be beneficial for TCP?
The simple answer is: Not really. One would think that it might increase collapse resistance of thin-walled TCP’s, but that is not so straightforward: A very tight fit between carcass and TCP is required to make such a hybrid work, since the carcass will only start to carry load after the TCP transfers the load onto it, for which it has to deform. If the fit between carcass and TCP is not tight enough, for instance because of differences in thermal expansions between steel and composite, the carcass can’t contribute in collapse loading because it is not loaded by the composite layer.

As such, in case a TCP requires more collapse rating for a certain application, adding a few more composite layers is the most cost effective way to achieve it.

In this series of articles, we will cover all relevant TCP Design Features.
Next time: Minimum Bend Radius. Contact us for more information on TCP and its benefits.